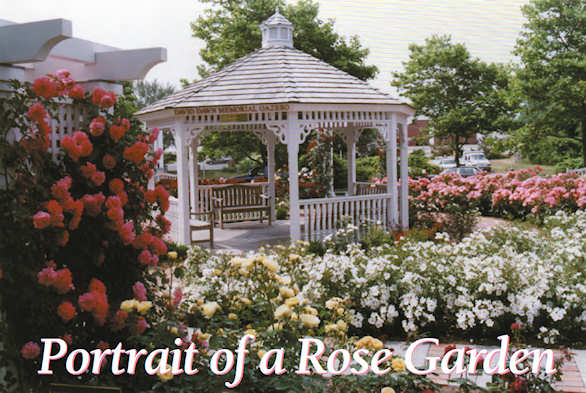 Less than a mile from the Atlantic Ocean shoreline sits a rose garden of indisputable beauty. Occupying a place of prominence in the quaint village of Southampton, NY, the Southampton Rose Society Rose Garden is the only public garden of its kind devoted entirely to the rose and existing on the eastern end of Long Island, NY.

The creation of that garden took on a life of its own and captured the imagination of a small group of determined rosarians. But before that idea could flower, the proposed garden would have to go through the normal channels of review and approval by the architectural review board as well as the planning board, two local agencies whose primary job is to protect the historical heritage of the village. It was not, however, the first time the Southhampton Rose Society would be involved with the town on a project involving roses. 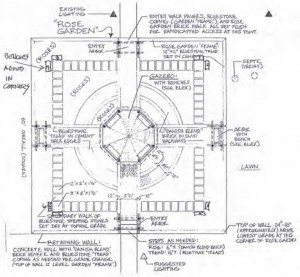 Back in 1979, three years after the SRS was established, its first president, Dorothy Nigro, along with 60 members, took on the ambitious role of hosting the 1979 ARS New York State District Convention. The local politicians and townspeople embraced the idea and were eager to help. Since there weren’t the hotel accommodations of today, Southampton-ites opened their homes to visiting conventioneers, and the town board renamed historical Jobs Lane to Rose Lane for one week. It wasn’t until the late 1990s that fate would present another opportunity for the SRS to return to center stage. Harvey Feinstein, then president of the society, attended the ARS national convention in Albuquerque, NM. There he discovered that the Albuquerque Rose Society was installing a rose garden at the Albuquerque Library. Feinstein returned home with a mission. He presented to the SRS Board of Directors the idea of creating a rose garden as a gift to the village of Southampton in commemoration of the SRS’s 25th anniversary. It piqued the board’s interest, and it was determined the logical location would be on the grounds of the new, still-under-construction Rogers Memorial Library. At first the idea met with opposition from some of the library board trustees. An expanded parking lot was preferred. It wasn’t until a few years later that Bill Murphy, an SRS member and library board trustee, convinced the other trustees that a rose garden was much more aesthetically pleasing to the eye and nose than misplaced macadam. But there was one condition – the SRS not only had to finance the entire project, but was also to be responsible for the perpetual maintenance of the garden. All parties agreed, and it was a go!

Top, the first phase of the garden under construction. Middle, laying the gazebo frame. Bottom, the garden completed and roses in the ground.

When a spot for the garden adjacent to the library and the antique Mercator Cooper House was finally chosen, another problem arose. The home of the seafaring Captain Mercator Cooper, which came with the property, was in the throes of restoration, and the architectural review board and the town planning board insisted the rose garden remain on the back burner until the plans for the restoration were finalized. This would take more precious time. Finally, Helga Dawn, an SRS charter member, made a convincing argument to all involved in the approval process that the construction of the rose garden was a separate entity and would pose no threat to the Cooper House restoration. Time was of the essence. Ground had to be broken before winter set in if the garden was to be completed for its dedication in June 2003. The boards unanimously agreed, and finally Sandpebble Builders was able to bring in their backhoes and break ground in the autumn of 2002. Since the SRS treasury lacked the necessary funds to finance the project, a fundraising strategy well beyond the scope of the typical garden tour would be essential, and it needed a strong group of dedicated individuals to carry it out. The task was formidable, and perhaps unattainable, had it not been for Helga Dawn’s enthusiasm. She had already enlisted Peter Ernst of South Fork Gardening and Landscaping to design the garden, and she carried his blueprints with her to every SRS meeting, talking up the project. She was relentless and her zeal was contagious. One by one members volunteered, and the rose garden became an obsession.

The garden was to be 60 feet square with retaining walls of brick and blue-stone coping with paths of brick and cement pavers throughout. In the center would stand a gazebo donated by Helga Dawn in memory of her late husband, David. Arbors would stand guard on each side of the garden and benches were placed in the gazebo, and strategically around the garden to invite visitors to sit among the roses.

The public was invited to purchase an engraved brick or engraved plaque to accompany a cement paver, arbor or bench. These were all means of raising money for the garden and were part of the first phase of the fundraising project.

Of course, the primary component was the roses. After poring through many catalogs and books, applying our own experience and using the American Rose Society’s Handbook for Selecting Roses as a guide, final choices were made. Pictures of the roses were arranged on a large worksheet by height and color, and then transferred onto the blueprint drawing with each rosebush identified by name, number and location to facilitate the planting of more than 360 plants by the landscaping crew. Lynch’s Garden Center of Southampton, a friend and long-time sponsor of the SRS, donated the entire stock of bare-root roses.

Thirty-eight varieties of modern hybrid teas were planted in three borders around the perimeter of the garden with several grandifloras and floribundas interspersed. Six varieties of climbers were chosen to drape each arbor. It was important to include fragrant roses in the scheme, and David Austin shrubs were the obvious choice to overflow the remaining fourth border and exude their delicious fragrances throughout the garden. Floribundas were planted in quadrants for mass effect inside the borders of hybrid teas and shrubs. Miniatures were planted inside the quadrants of floribundas in their own beds set out in quadrants at the foot of the gazebo with a row of dwarf English boxwoods at their back. Four rose trees were chosen to stand guard in each corner of the garden. 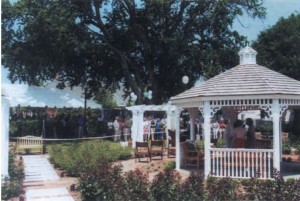 Many attended the dedication of the SRS Rose Garden on June 14, 2003.

With the garden finished, plans were put into place for its dedication. Helga Dawn and C. Z. Guest were invited to be honorary chairpersons.

Dawn and her late husband David, were more than merely acquainted with the culture of growing roses. LaRoseraie, their estate in Southampton, drew visitors from around the world to view its spectacular gardens that held more than 2,000 roses of more than 400 varieties, and was a winner of the prestigious Jane Righter Rose Medal by the Garden Club of America. Their garden was photographed numerous times and appeared alongside the premier rose gardens of this country in countless magazines and books. David Dawn was well known for his generosity and willingness to help anyone who wanted to know the secrets of growing beautiful roses. The recipients of David’s knowledge and expertise are numerous, and they were the first to offer donations to the garden in his memory. 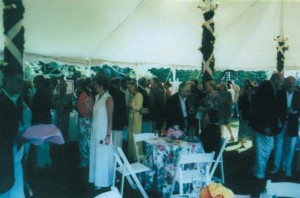 The fundraiser cocktail party, silent auction and raffle held at "Fairfield" in July 2003, was hugely successful, raising more than the stated goal.

C. Z. Guest, “an American aristocrat”, fashion icon, author, columnist and noted horticulturist, was enthusiastic about joining the cause. Widely recognized for her gardening expertise, Guest had a personal love and affection for the rose. This garden was one of the last projects she was involved in before passing away in the fall of 2003.

The theme of the dedication was THINK PINK! Mayor Joseph Romanosky, Director of the Rogers Memorial Library Debra Engelhardt, C. Z. Guest, Helga Dawn and SRS president Spencer Dworkin were the guest speakers with Guest and Dawn performing the ribbon-cutting honors. The perimeter of the garden was wrapped in yards and yards of 4-inch pink satin ribbon. Two ‘Sea Foam’ shrubs tied up in pink bows welcomed guests. Pink, green and white balloons floated high above the gazebo against a baby blue sky. Hundreds of friends and townspeople turned out for the celebration, and Mayor Romanosky presented a plaque to the SRS in recognition of its gift to the village of Southampton. After the ceremonies, C. Z. Guest autographed her book Garden Talk: Ask Me Anything, donating a portion of the proceeds toward the completion and maintenance of the garden, while refreshments were served under a reception tent.. 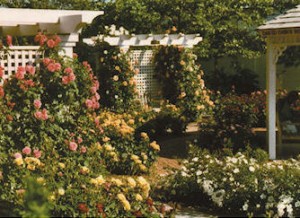 After the dedication, all efforts were concentrated on the cocktail party fundraiser scheduled for mid-July. It was important to capitalize on the media buzz, while the SRS Rose Garden was still fresh in everyone’s minds. A host committee comprised of prominent socialites, famous fashion designers, magazine and newspaper publishers, authors, art galleries and even equestrians not only lent their names and made generous contributions, but spread the word of the upcoming fundraiser event. Free advertising in local magazines and newspapers, as well as the Internet, got the word out to an even wider audience. Hilary Geary immediately offered her beautiful home, Fairfield, for the party. The fundraiser committee, made up of 15 SRS members, transformed into party planners, publicists, telemarketers, tent decorators, food critics, direct mail specialists, wine connoisseurs, generator operators, lighting designers and the most efficient and well-dressed clean-up crew ever spied behind the high hedges of Southampton. 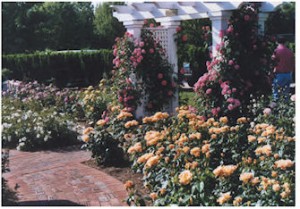 'Rosarium Uetersen', 'Starry Night' and 'Easy Going' are thriving on the first anniversary of the garden.

The committee also worked hard at obtaining items and services for the silent auction and raffle. A Caribbean vacation for two and a day of golf at Shinnecock Golf Club, home of the U.S. Open, were just two of the many items that made the fundraiser hugely successful. In fact, the committee raised over and above its financial goals, which would not only pay for the completion of the garden, but would help pay for its maintenance.

Despite the harsh winter experienced in the Northeast, all the roses survived and are thriving. Peter Bertrand, a long-time member of the SRS, horticulturist and landscaper, has been chosen as caretaker for the SRS Rose Garden, and the personal pride and care he gives it are unequalled.

Under the new administration of SRS President Jane Indoe, the garden began its first phase of educational pro-grams by inviting the public to its annual pruning session. Plans are also in the works to expand the program to target students from the local school system to participate in workshops and lectures on planting and caring for a rose garden for the purpose of molding the rosarians of tomorrow.

Another benefit to come out of the creation of the SRS Rose Garden is the new awareness of the Southampton Rose Society and the recognition of the rose as our national flower. Membership has increased as a result, and, for the first time in the history of the SRS, the society is in a position to budget advertising dollars to promote lectures, garden tours, workshops, the annual rose show and educational programs. More than ever before, members are teaching and demonstrating how easy it is to grow roses, and sharing our knowledge and expertise with people who thought it was impossible to grow a rose garden.